Playing Horizon Zero Dawn is emotionally exhausting, now I may be in a majority here. But I tend to get emotional with most games I play. I’ll cry if something sad happens, I’ll get mad along with the main character and I’ll want revenge if given the chance. In my mind, I don’t see a point in playing a campaign if you’re not going to hunker down and invest yourself. It just makes everything way more fun and allows you to become a part of the world. Heck, it’s the primary reason I made this site, to express my feelings and thoughts alongside my gameplay videos. 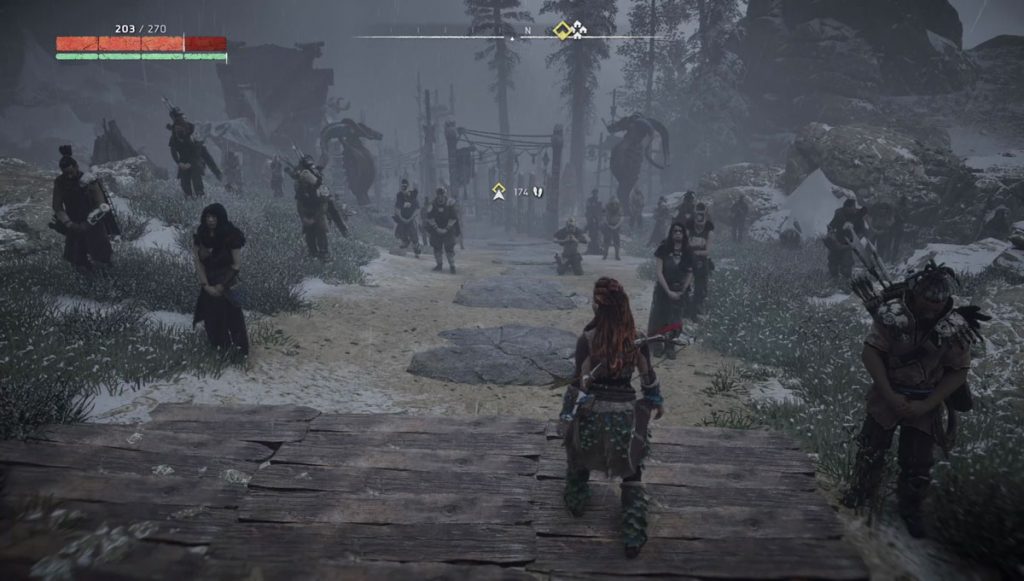 This picture sums up what has happened lately pretty well

We start off with a scene of mourning as everyone came around to pay respects to the fallen in The Proving. It’s a slightly sad walk down the road, it’s kinda cathartic in a way. It gives you ample time to process everything that just transpired for poor Aloy. This is what Horizon Zero Dawn excels at, making something happen but allowing you time to disgust it. Let’s analyze things real fast; Rost died, everyone else at The Proving died, Aloy is now a seeker, wow that was fast.

We run in Teb by the gate we’re trying to leave through just for a little recap on everything that has transpired. Anyway time to leave but first we have to get that gate open. Unfortunately, to open the gate we need Resh to order it open, he was the guy that was in charge of the first part of The Proving. Of course, he is completely unhelpful and really rude after learning that Aloy is now a Seeker. I decide to air on the side of intelligence and outwit him which was a reasonable move. I just didn’t want to incite more violence, there was enough of that lately. 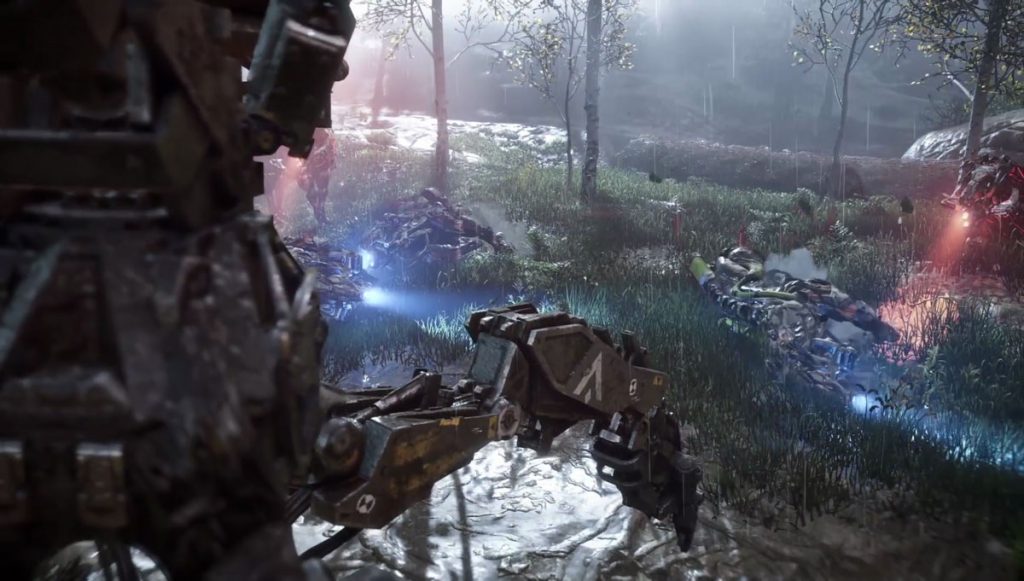 This new machine baddie is corrupting the other machines for evil

Just as soon as we’re about to butt heads a new machine comes out of nowhere and sends out so bad mojo. I’d imagine it’s being controlled by someone with a focus, but basically, it’s taking control of the other machines. This is bad, like really bad; super amazingly bad. The machines rushed the gate and we had to be ready for one hell of a fight. Of course, I totally blow the beginning by not trapping the spot right in front of the door. Man, I felt so dumb cause this disrupted everything after the gate was torn open. 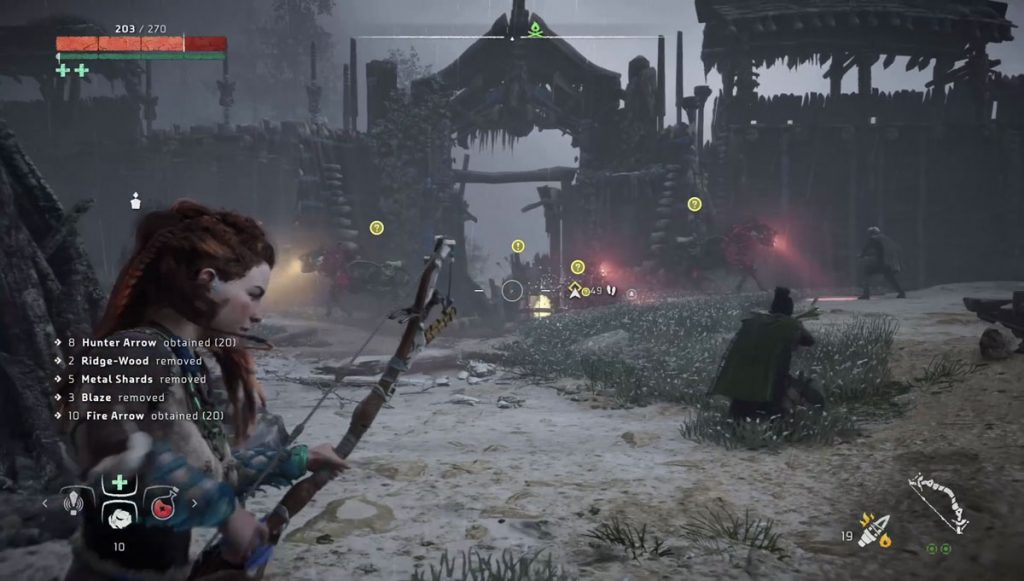 From this point its just a fight to stave off the oncoming horde of machinery. I did not handle this fight exceptionally well, I felt very underprepared. Now I’m not to say that it felt cheap I just don’t think I handled it all that well. While the not big scary machines went down with little to no problem the new menace was a whole different story. No matter what arrow I used it didn’t seem to matter much when trying to do damage. Regular arrows weren’t worth it, fire arrows just felt worthless and the TripCaster was no help at all. Any attempt at going in for a melee attack just ended with me thrown around with a big chunk of health taken off.

The only recourse I had was to keep my distance and just take its health down bit by bit. Now I do realize that I could have been more calculated and taken off his body parts with some good strikes. However, in the midst of battle, it was way too intense and it moved way to fast for me to even think about it. Let alone pull it off with my awful aim. In the end, I just kept my distance, dodged his long range attack and whittle its health down till it died. It felt like a really long time even though it wasn’t a very long battle. After taking it down we retrieve the part is was using to control the other machines and add it to our arsenal. 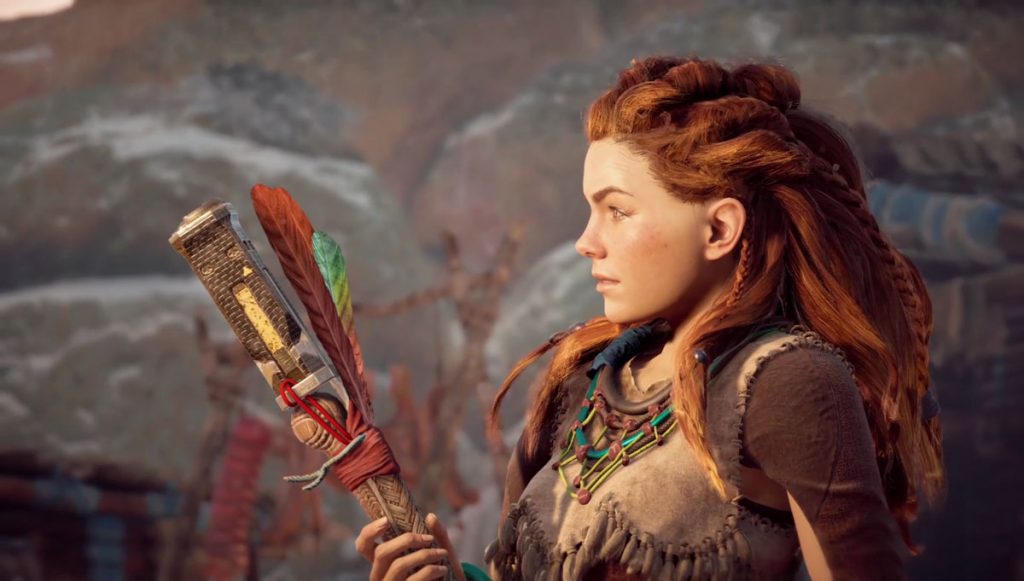 O’ Brother Where Art Thou

Now Aloy thinks we can control the machines herself with the thing we pulled from the machine. So we definitely gotta test this theory out. However, before we get the chance I hear a voice in the distance who needs assistance. Turns out Olara needs help finding here brother, thankfully as Aloy has just passed The Proving she has no quarrels talking with her. We ask some questions and zip line down to the scene of the crime. We arrive at a deserted camp and do some investigative work that basically devolves into following a blood trail. 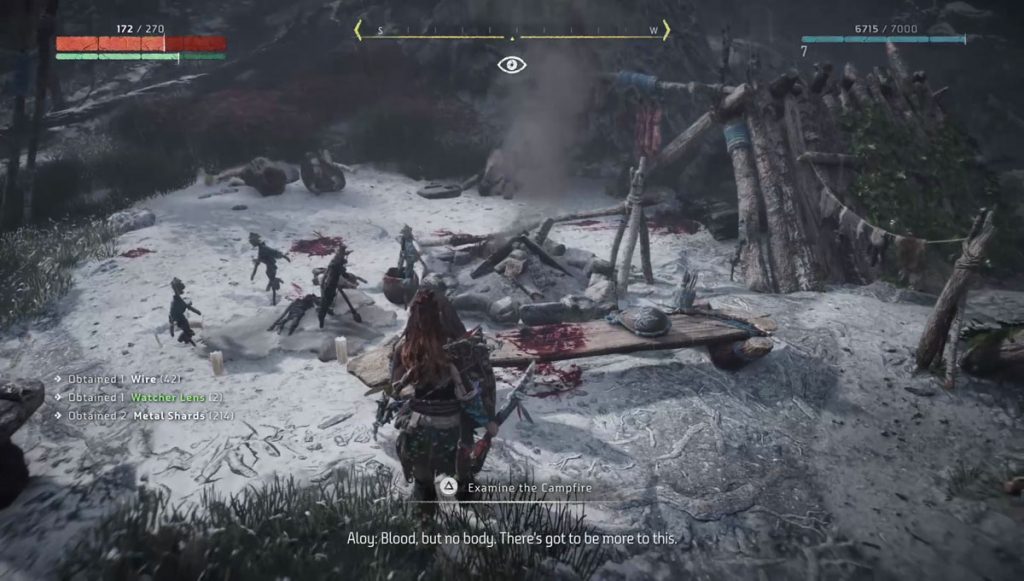 Turning on the Focus reveals a that the blood actually managed to travel quietly the ways away from the camp. We find a knife, a bucket, fight off some machines, check out a pig head and reach a machine doing something odd. We discover that the brother must be a good fighter as he managed to take down a machine. But soon after we find a bunch of discarded food and gear. We finally catch up to the brother as we hear him shouting how he’s going to kill himself. Which you know is never a good thing.

Talking Brom Down From the Ledge 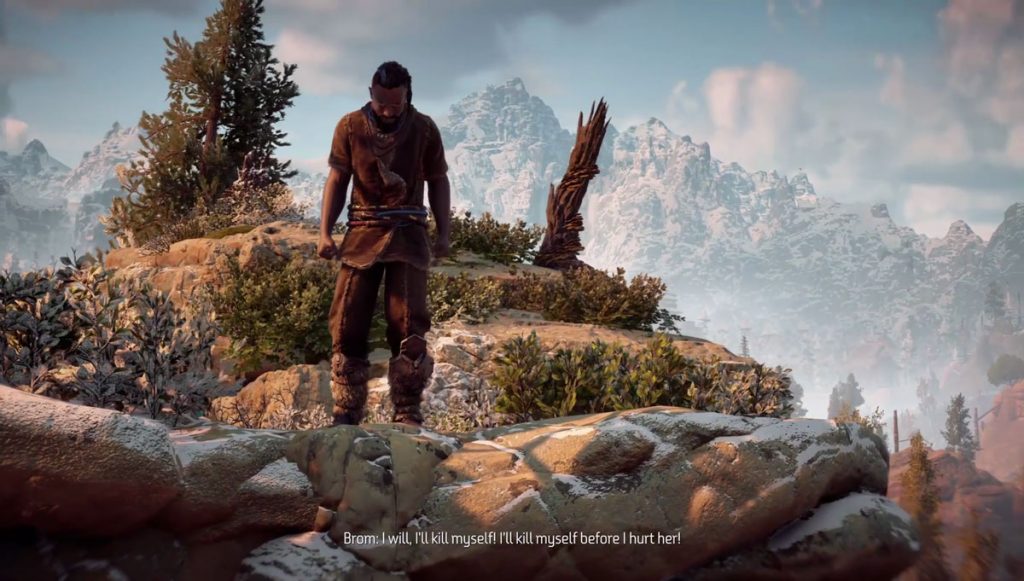 Brom thinks he hears voices telling him to do terrible things. Taking a moment to analyze the situation I decide to choose the choice where we talk to him rationally. By making him come closer we talk him away from the ledge. After a little crazy chat Olara (his sister) states that she was following us and just glad we found him. With the choice of letting him go with her or back to a tribe for help, I decide to leave him with his sister. Now is this going to come back to haunt me, I’m not sure but I sure am curious.

Hey, if you’re playing Horizon Zero Dawn let me know! I’d love to know what you think in the comments below or over on Youtube! As a result, I can grow and strive to make better content down the road. I am really enjoying this game and would love to hear your opinions on the game. Remember to like, comment and subscribe if you enjoy my content; it really helps me out!